One of my most visited webpages of 2016 was FiveThirtyEight’s 2016 Election Forecast, a habit apparently shared by many of us at SixFifty HQ. Even our name, primarily a reference to the 650 constituency seats being contested in the UK general election on June 8th, is a deferential nod to FiveThirtyEight. There’s something surprisingly addictive in seeing how the latest news story might impact the polls one way or another during an election campaign.

For anyone familiar with psychology or growth hacking, an election tracker is quintessential Habit Forming 101:

In short, building a poll tracker was a big priority for us, but it wasn’t quite as simple as plugging a Javascript visualisation library into an API for polling data…

There are many good repositories for open data in the UK:

Unfortunately, opinion polls are conducted by commercial polling firms and are not quite so open (read our series of explainer articles for more information on how polling works in the UK). For example, if The Times commissions YouGov to conduct a survey on voting intention across Britain, this data is released in several ways.

The headline results are compiled, analysed and released as articles by both the publisher as well as the polling firm.

The “raw data” is released as a set of “tables”, usually either a PDF or Excel spreadsheet containing various breakdowns of each question in the survey. Election polling usually includes a number of questions such as:

This is what “raw” polling data looks like (source):

Even if liberating this data from their PDF prisons was possible to automate (we gave it a decent shot, big shoutout to Tabula for doing the heavy lifting), it wouldn’t necessarily be the best use of our time. So we looked elsewhere to see who else might be doing this already.

We evaluated a range of sources for polling data. These were our minimum requirements:

We also had some “nice-to-have” requirements for sources of polling data:

We evaluated several aggregators of polling data against this criteria: OpinionBee by Andy Hartley, the HuffPost Pollster by Huffington Post / Pollster, the incredible PollBase by Mark Pack, Britain Elects by Ben Walker, Electoral Calculus by Martin Baxter and the UK Polling Report by Anthony Wells. 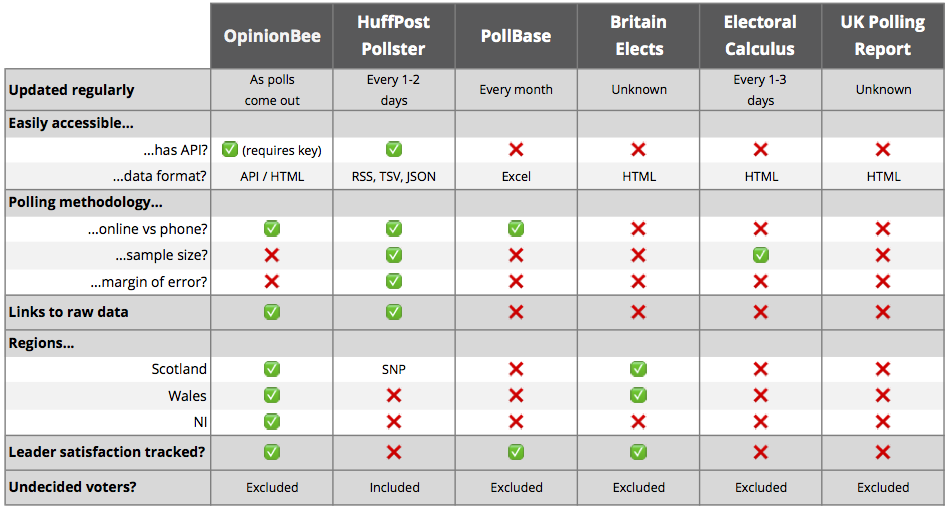 Nothing quite satisfies even our minimum requirements. OpinionBee comes very close with quick turnarounds and easily accessible data (including links to the raw tables) but falls down on providing some of the additional information we were looking for. HuffPost Pollster only provides unweighted data (i.e. including undecided voters) and has slightly slower turnarounds. PollBase is an amazing resource (it has polls going back to 1943!) but updates are less frequent.

One of SixFifty’s goals is to contribute to the reservoir of open political data if we find there’s a genuine unmet need. Polling data seems to fall into this category, so we built our own open polling data pipeline.

“Simple but effective” is our guiding principle here. We’re hitting as many of our stated requirements as possible using a fast process that also avoids creating any backend infrastructure:

We’ve chosen to release our datasets in JSON, CSV and Feather formats as we believe a good open data portal should make it as easy as possible to import data into your tool of choice. If you don’t know Feather, it’s a next-gen file format resulting from a collaboration between pandas’ creator Wes McKinney and R mega-guru Hadley Wickham that preserves dataframe metadata (saving a good few lines of type coercion), optimises read/write/storage and ultimately improves interoperability between R and pandas.

My initial “quick & dirty” approach was to use R’s ggplot2 to generate a static image in a variety of web-friendly sizes and push them to S3. As with everything we do, the code for this is on GitHub.

Meanwhile, our frontend guru Dan Palmer was looking into options for rendering an interactive poll tracker in the browser. We considered using Victory, a collection of React.js components for building interactive data visualisations, but in the end opted for stock D3.js.

The rationale here is that SixFifty, like many open source projects, is composed of many volunteers contributing their time intermittently. Our engineering approach is more of a relay race than a solo marathon. Sticking to commonly used tools and libraries makes it easier for someone else to pick up the baton and run with it.

As long as you’re familiar with React and D3, you should be able to adapt our code and rework the poll tracker for any election. If you feel like turning it into a reusable component and open sourcing it in its own right, get in touch, we’d love to help!

Follow SixFifty on Twitter, Facebook, Medium or Instagram for updates and commentary whenever a new election poll is released. If you’re as addicted to tracking elections as we are, you could even bookmark or pin2 SixFifty to your browser until June 8th.